MFMK (Music for My Kids) 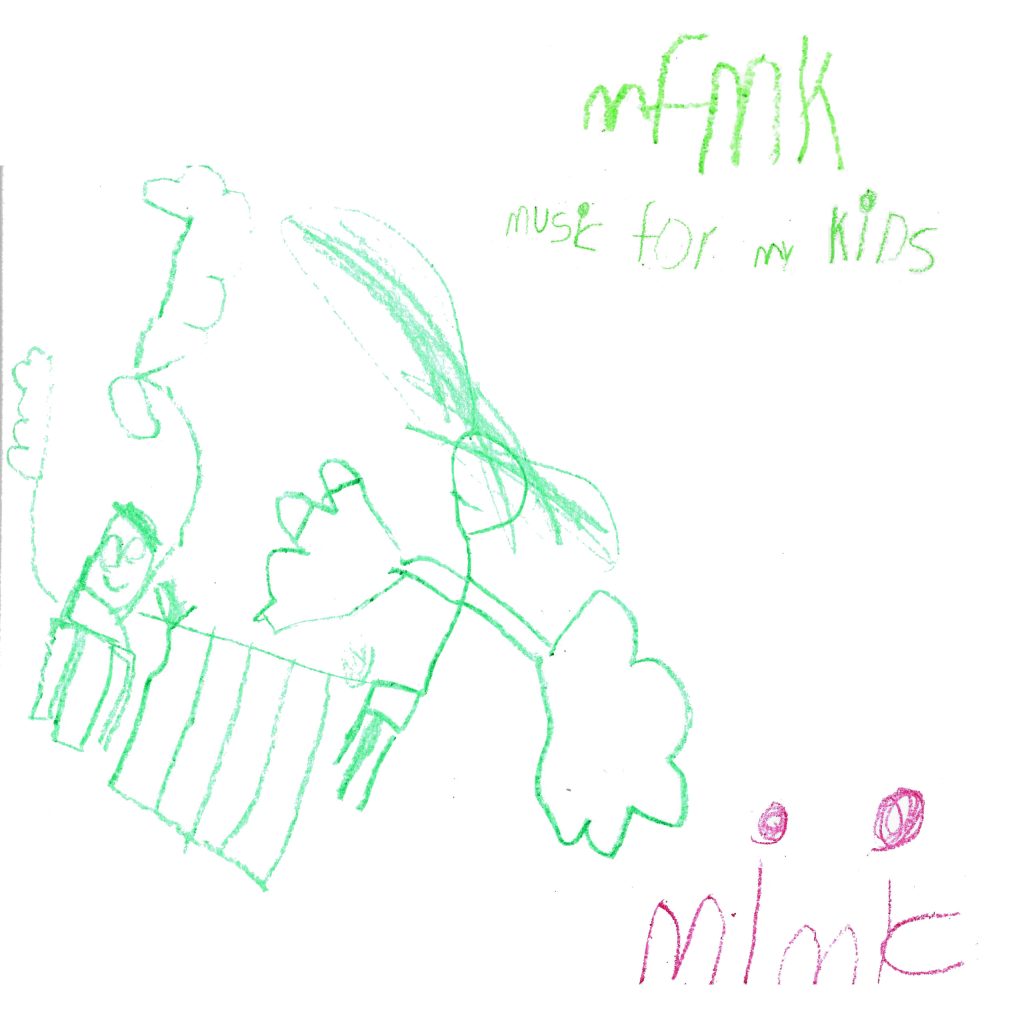 MFMK, also known as Music For My Kids, is exactly that. I wrote this album for my children. The album features 17 available tracks and 1 unavailable recording.

Always there, even when I'm not

The main purpose of this album was to create music my children can listen to throughout their lives. Some of it is not really meant for them at this time in their life, but as they grow up, more of the album will apply.

Since the day they were born, I’ve been there for my kids. Everything I do has been aimed at protecting them and helping make their lives better. I’m a dad. That’s my job. But as much as I know that, I’m also aware of the fact that I won’t always be here. This album serves as a way to speak to them always.

I wrote music about heartache, fighting for your future, improving yourself, being bullied, and how hard it is to be a parent. I wanted to try and cover a lot of ground so I can help them throughout their lives, even if I’m not around anymore.

While this album has a tracklisting of 17 tracks, this is not the real total. The 18th track, titled Forever, is a single that will not be made publicly available. In fact, no one else has heard it, including my wife. The song is meant to be released to my kids after I pass away, and is intended to be a final word from me to them.

Help from my kids and wife

While I am responsible for most of the lyrics on this album, I’m not the only one you hear. Both of my kids and my wife also made appearances.

The introduction, titled My Heart, features audio clips from some of the many videos I’ve recorded of my kids over the years. This includes my son trying to recite his ABCs and my daughter talking to me after I found her inside her toybox.

My kids are also featured on a few more tracks, including Weird Kid, Hero, and the skit Reeding Is 4 Rich Ppl. The skit was where they had the most fun, but it’s easy to see why when you listen to it.

One of my favorite tracks, The Song About Heartache, features singing by my wife. She recorded probably half a dozen cuts so I would have different versions to choose from. In the end, I used them all. Personally, I think she greatly outshined me on this track.

The first time I saw the movie Cinderella Man, I knew that it would not be the last. I ended up buying the DVD and digital version on Vudu. That movie has long since been my favorite film and it’s easy to see why. It tells the story of legendary boxer James “Jimmy” Braddock, aka the Cinderella Man. As great as Braddock was in the ring, outside of it was the hardest fight he ever encountered.

The Great Depression was hard on everyone at that time, and celebrated athletes were not immune. Braddock, like many others, was faced with an incredible struggle just to feed his family. It was far from easy and caused enormous amounts of stress and depression.

Eventually, things turned around and he was able to literally fight his way back to being well above water.

In the mid-2000s through the mid-2010s, I found myself landing in similar positions. Job losses hit us hard. I say job losses, but I’m referring to my own. There is a reason this song doesn’t mention my ex-wife’s job. During the entirety of our marriage (9 years together), she only worked for 6 months. That was all left up to me, as she would actively avoid getting a job.

That kind of stress was destroying me and anyone truly paying attention would have noticed that. I had trouble sleeping, developed stomach ulcers, and spent countless hours trying to teach myself new skills to improve my job prospects.

After the 2014 job loss when we nearly lost our home, I fired out tons of job applications. This was the second time we had run into this situation, but this one was worse. We had two kids, one a newborn, and no income. My unemployment claim was being denied and fought by my former employer.

I went to every interview I could. I started sleeping on the floor in my home office just to be closer to my computer. If an email came in, I wanted to know immediately. Though most of the interviews seemed to go well, none of them panned out. During one, the interviewer for a staffing agency actually laughed at me when I told him how much I wanted to make.

The thing is, I know what the pay scale is for that job and for my skillset. Still, he compared it to others who had come in there and made it seem like I was nuts.

I needed a job so I ignored his ridicule and offered to lower my pay acceptance. I was still not hired.

I was a tremendous failure to my family. We were on the verge of losing our house. I couldn’t feed my kids. The first time this happened, I had to borrow food and money from my dad. This time, I didn’t tell him about it until after it was over. I just couldn’t do that again. Instead, we borrowed money from my ex-wife’s parents and her friends. That was always her go-to instead of getting a job.

In the middle of the year, things turned around. I found a job and vowed to never let anything like this happen again. A few months down the road, I went back to school and got a degree in Computer Science. I already knew how to do the things they taught me, but employers at the time cared more about a piece of paper than demonstratable ability.

A couple of years after that, I learned to trade stocks. Like every beginner, I lost money. I found a guy online named Joe who helped me turn that around. Thanks to him, I learned technical analysis and was able to make additional money to help support us.

I also began reviving the plans for a business. As I said, I was not going to let this happen again. My family is important to me and failing them has been among the worst moments of my life.

I’ve always been a huge fan of Mortal Kombat. The first time I ever saw the game was in a bowling alley, but it wasn’t a typical arcade game.

The game consisted of four parts. One was a big box near the wall of the room, with two long pipes coming off of the front of it. They ran to a standalone control panel, presumably containing the wires that connected it to whatever the big box was.

It turned out the big box was housing a large project television. Once it was pulled out and set up, everyone was able to see the bloody awesomeness of Mortal Kombat.

That was when my long fascination with Mortal Kombat started. It even spawned the idea of making my own game, something that never actually happened but I dreamed of doing as a kid. I reference this in the song “Weird Kid”.

Because my kids are also big fans of Mortal Kombat, making a song based around it made sense. The premise of the song revolves around me entering Mortal Kombat with the intent to destroy Shao Kahn. The song reveals that I’m some kind of undefeatable being that destroys competitors effortlessly. This was similar to the idea behind a character I had created for the game I wanted to make.

It features a lot of extreme moments, including standing on the ceiling while stealing Shang Tsung’s soul and instantly slicing Motaro in half with Kenshi’s sword. There is also a mention of ripping Shao Kahn’s fist off, then beating IT with HIM. Yes, you read that right. I didn’t beat him with his fist, I beat his fist with him.

The track is littered with Mortal Kombat sound effects and follows a skit in which I destroy someone named Melvin. It’s not likely that this is the only time you’ll hear from Melvin, even if he is blasted into nothing but elbows and buttholes.

The making of a fart artist

So, the weirdest track on the whole album is not one related to Hannah. No, it’s this odd song I wrote about how my son is a superhero called the Fart Artist. In it, he uses farts to fly, fight bad guys, and spawn helpers.

This was probably one of the most fun tracks I’ve ever worked on. It is completely ridiculous. The idea came from a conversation with my son, which I just happened to record and was added to the end of the track. In it, he explained to me that he could fart out friends. He started talking about how his farts could draw but in the end, he had an army of farts.

As ridiculous as this song is, my kids found it very funny, and that’s all that matters.

In the end, we all end. This is unavoidable, and as much as I’d like to always be there, I know I won’t be. And while many people think they know what happens afterward, it’s all just a guess, regardless of where that information is coming from.

In “The End”, we find out that I’ve somehow died in a strange and hilarious way, God sounds like Santa Claus, and he’s obsessed with Miranda Cosgrove. We also learn that when we die, we get to write our own stories. As I’ve referred to it in the past, you essentially become the god of your own universe. You get to create your own world and events going on.

It also explains why there are so many things that some say God hates. Turns out, he doesn’t hate it. If he did, he wouldn’t allow it to be possible in the first place. That’s why we can’t fly.

The track is mostly humorous and includes references to The Good Place. I get my own Janet, but it’s Hannah. This pretty much convinced me that I was in The Bad Place though I really wasn’t.